A Need For Variety

Client wanted a fresh new look in front of their home that was low maintenance in Sarasota.  Many of the plants were overgrown and the Ligustrum tree was overpowering the front of the house.  After 3 meetings with the clients a final design was agreed upon and within the client's budget.

The plan was put into action.  Almost all the plants and trees were removed except for the Ixora 'Nora Grant' hedge in front of the windows.  A raised plant bed was created in front using boulders and filled with top soil to add another dimension to the landscape.  A Triple Pygmy date was installed in the raised bed surrounded by Croton 'Petra' for a bit of color.  The bed in front of the house was finished off with African Iris, Gold Mound Duranta, and Carissa 'Emerald Blanket'.

On the left side of the garage the large Pygmy Date Palm and Philodendron 'Xanadu' were removed as well as the Croton 'Mammy' along the walkway to the front door.  A Boulder was installed and surrounded by Lirope, Hibiscus, and Dwarf Ixora.  The Crotons along side of the garage were replaced with the same Crotons but 15 years younger.

The right side of the garage was also renovated by removing the large Ligustrum tree that was growing against the corner of the garage and the Philodenderon 'Xanadu' that were growing at the base of the tree.  A Double Pygmy Date Palm was installed were the Ligustrum tree was installed and the bed was finished with Lirope, Cocoplum, Texas Sage, Dwarf Ixora, and a medium size Boulder.

The beds adjacent to the front door had Blue Flax Lily, Dwarf Tibochina, Ti Plants, and Dwarf Podocarpus installed to replace the overgrown Philodendron 'Xanadu' that were growing out of their space.  All the beds were topped 2 inches of Cocoa Brown Mulch. 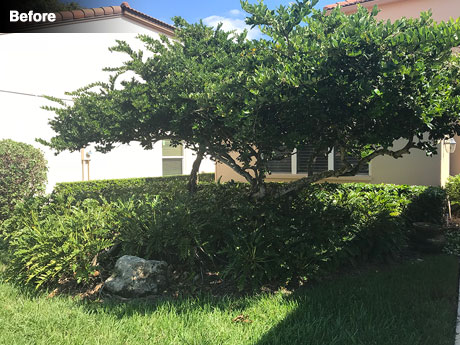 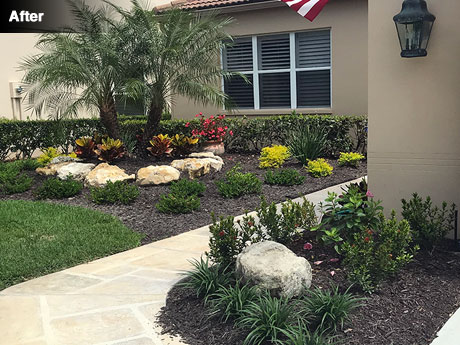 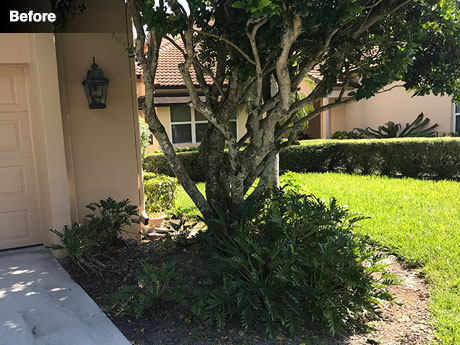 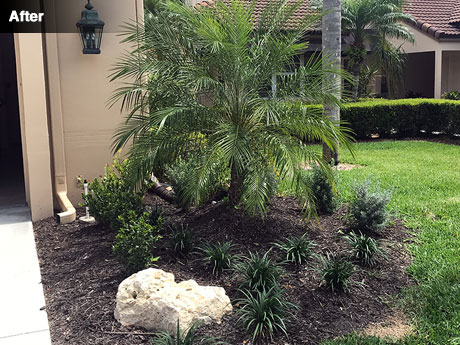 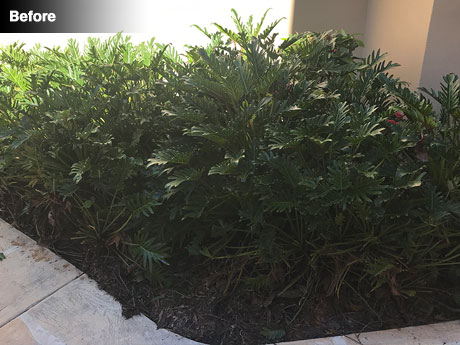